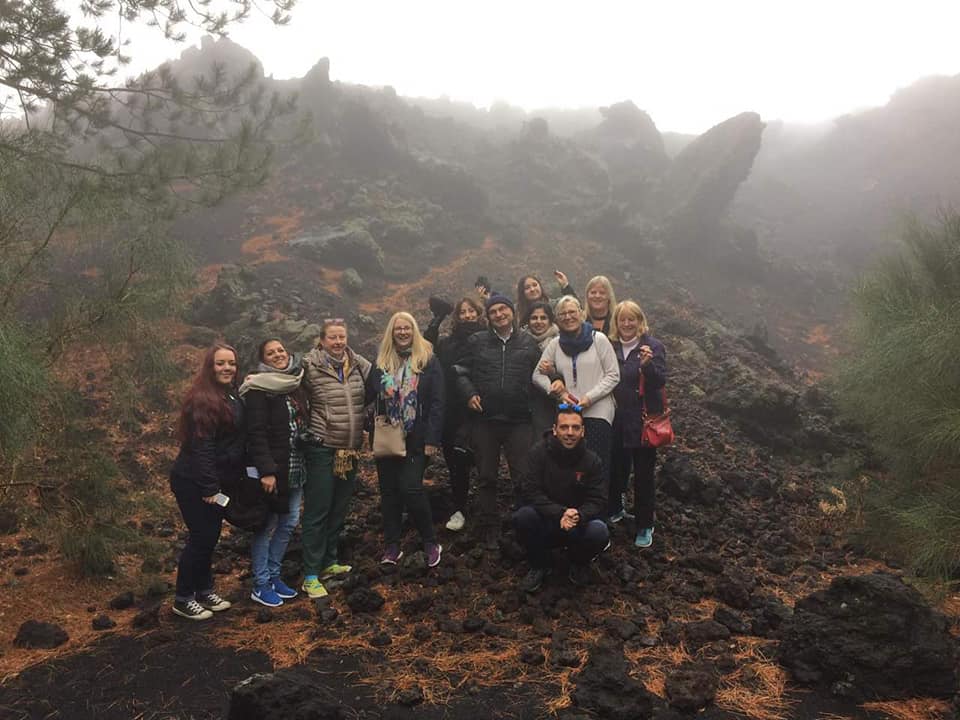 By Jade Konnoris
On 6th December 2018, I visited the beautiful island of Sicily with Typically Italian. Our wonderful group of Travel agents from around the country flew direct into Catania with Air Malta and then made the short journey to our hotel for the next four days; the 5-star Romano Palace.

The hotel was beautiful, surrounded by tropical gardens and it was in a great location, just outside of the centre of Catania. The perfect base to explore. After we were all checked in, we headed into the heart of Catania itself. 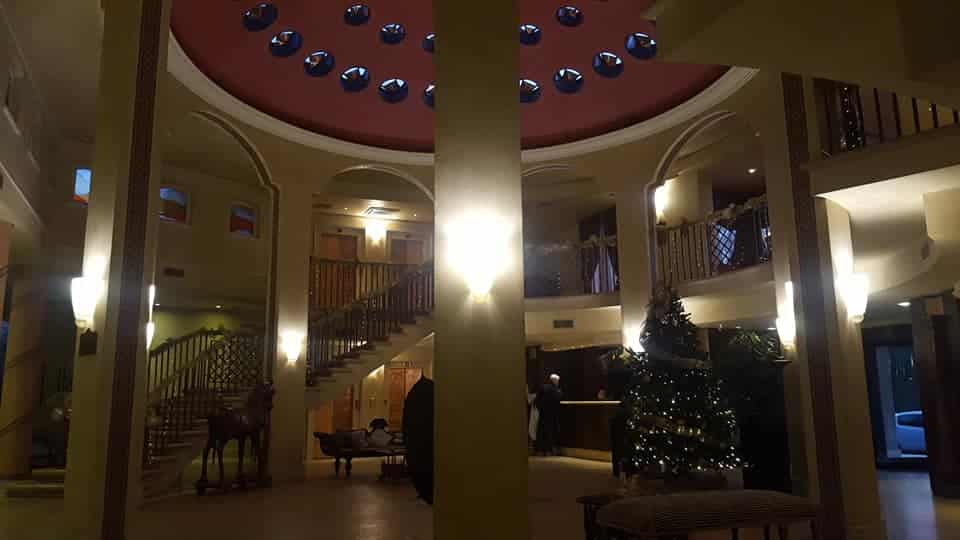 Catania is a UNESCO world heritage site, filled with many baroque buildings, the unique and beautiful architecture the island is famed for. We walked around the city to explore and see the many Baroque style buildings, the Roman theatre, the piazza’s and the little Christmas market.

Our first day came to the perfect end as we all sat down to enjoy dinner at Me Cumpari Turiddu; a Michelin restaurant. Though I’m still a little traumatised by seeing ‘donkey meat’ on the menu! 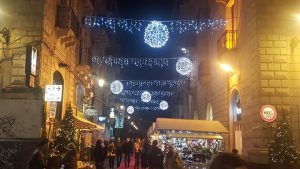 My second day in Sicily was one of my favourites, and for me, one of the most memorable. We took a 4×4 up to one of the highest points of Mount Etna. I’m a huge lover of nature and incredible scenery, so exploring this active volcano, seeing the unique formations of lava and the remnants of previous eruptions, was amazing. 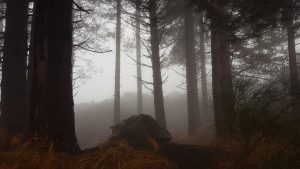 The landscape and forests we hiked through were shrouded in mist and had such a magical feel to them. It was so beautiful, it was surreal.

You can even see the huge wall of lava and rock where the flow of lava had stopped. 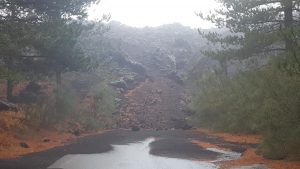 We then hiked to a lava cave; a naturally formed cave after one of the volcano’s huge eruptions. We descended into the darkness of the small lava cave to get a closer look.

What better way to follow this, than relaxing in a beautiful log cabin cafe, in the middle of the forest, sipping on hot chocolate?

After our incredible trip up Mount Etna, we then travelled further down the mountain to visit a vineyard and winery; Cottanera. The vineyards here grow over lava stone, 700 metres above the sea, on the northern slope of the volcano.

After exploring the vineyard and the winery, we were treated to a delicious, multi-course lunch by our host, and sampled a few of the different wines that are produced here. I had to bring a bottle back home!

After lunch, we then headed to the small, medieval town of Randazzo. This interesting and unique town is known as ‘the black town’ and believed to have a foundation dating back to Byzantine times, around the 9th century AD. 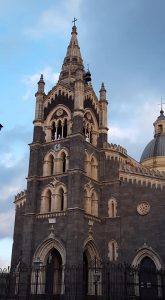 The next day was another of the most memorable for me. We visited the stunning city of Siracusa and Ortigia, a city full of timeless beauty, ancient Greek ruins and one that is rich in history.

There are even remnants of ancient temples in the middle of the city, which was built around it.

We toured the breathtaking Neapolis Archaeological park that has awe-inspiring caves, ruins and an ancient amphitheatre that was used by the Greeks and Romans when this city was at its most magnificent. It is still used today to host shows during selected times throughout the year. 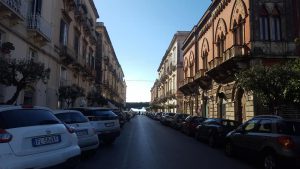 We then headed to the town of Noto which is the most wonderful representation of baroque architecture that makes it so different, unique and eye-catching.

After being completely destroyed by the catastrophic 1693 earthquake, it was rebuilt entirely from scratch. Every year in May, this town holds a famous flower festival on its cobbled streets.

Noto itself is also a UNESCO heritage site, filled with narrow winding streets and stunning views as the sunsets.

We then headed to Acireale, ‘the city of one hundred churches’, to explore even more significant baroque monuments and historical buildings. 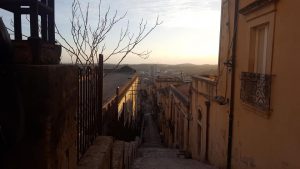 Our final day in Sicily was spent visiting three beautiful different areas of the south-east of Sicily. Our first stop was Scicli, a stunning yet quaint town that surrounded by a dramatic backdrop of hills and cliffs and filled with opulent baroque architecture.

After the horrific earthquake that devastated most of the region back in 1693, the entire town was rebuilt, keeping as much of its original, medieval layout as possible.

We then visited the breathtaking Ragusa. Arriving in Ragusa through winding mountain roads and looking down at the town with such a dramatic backdrop of hills and steep valleys, takes your breath away.

It was one of the most beautiful parts of Sicily and is also a UNESCO heritage site.

It was here that we also had an incredible 7 course, delicious lunch at a luxury Michelin restaurant called Locanda Don Serafino.

Our final stop was Modica. Just 15km from Ragusa, this town is known for it’s fine and unique chocolate! We were lucky enough to be here during their chocolate festival so the streets were alive and bustling with a parade and live band.

What makes this town (and its amazing chocolate) so unique is that they still process the chocolate the same way the Aztecs did back at the time of the Spanish Conquistadors.

Our trip wasn’t complete until we visited Antica Dolceria Bonajuto, where we tasted this legendary chocolate… and bought a lot to bring back with us. 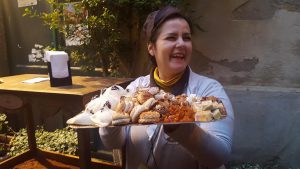 Heading back to Catania, our trip was coming to an end. After the many beautiful places we visited, and the luxurious Michelin dining we were treated to….  it was now time to end our incredible trip here in true, Sicilian style.

We were surprised by a final meal of delicious, Sicilian pizza at FAB!

Book your holiday to Sicily now

Sicily was such a beautiful place to visit, so full of stunning scenery, delicious cuisine, historic architecture, and stunning ancient sites. I cannot wait to visit again in the near future to explore even more.

Ready to book your Sicily trip of a lifetime? 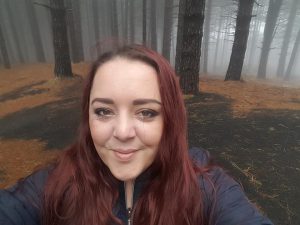 I have been working in the Travel industry for the past 10 years, and have been lucky enough to travel to many different places – though I have barely made a dent in my own bucket list! I am very passionate about Travel, and so inspired by different cultures, history and awe-inspiring scenery. I definitely have a case of wanderlust! So far, I have travelled to the USA for three months which was incredible.

I have also had specialist training on many cities throughout the country I’m so fascinated by, and I love to recommend many amazing places to visit and experiences to make your trip even more memorable. I have also travelled to the Caribbean, Greece, Balearic Islands and Egypt an unbelievable 32 times. Asia is next on my list!

I love sitting down with people, getting to know them a little, and then putting together the perfect package for them and their needs; something unique to them that will make them leave me even more excited about going. Nothing makes me happier than hearing all about their time away, when they return.

Get in touch with Jade at our Braintree Travel Branch

Get in touch with Jade at
our Braintree Branch: